Ordinarily, the Oxford Networks for the Environment (ONE) invite an external speaker to give the keynote lecture at their annual event. But, because this year’s occasion was also the launch of Oxford University’s ambitious sustainability strategy, the organisers felt that a highly distinguished internal speaker could act as a symbolic bridge between the university and the wider world.

As the ONE Chair, Jim Hall, noted in his introduction, Oxford’s Prof. Yadvinder Malhi’s reputation is truly global. Professor of Ecosystem Science at the School of Geography and the Environment, he is world-famous for his research on tropical forest ecosystems and has ongoing projects on four continents. He is a Fellow of the Royal Society as well as a recipient of the CBE.

And yet, despite all this, he is also currently working on ecosystem research and conservation in our own backyard, across the Oxfordshire county. If the key theme for this year’s event was connecting the local, national, and the global, then Yadvinder was the perfect main dish, delivered to the organisers on a silver platter.

After some initial comments on the growing realisation of how ‘large’ humanity is becoming, and the paradigm shift this is entailing, Yadvinder introduced the graph above. He proposes a handy way of thinking about the blue line there: Metabolism. Those of us who have struggled to gain or lose weight will likely cite our metabolisms as a key reason. When applied to sustainability though, metabolism becomes a useful indicator of the strain we place on the planet’s biosphere.

Each biological being, the plant kingdom included, has a metabolism roughly defined as all the energy flowing through it that enables it to function. When we estimate every living organism’s combined metabolism on Earth we get the biological metabolism of the biosphere. 150 terawatts is the total for all life on land, with terawatts representing a unit of energy flow per second.

In comparison to this combined figure for all of life on land, the total metabolism of humanity has long been just a small fraction. But, as you well know, over the past century and a half our numbers have skyrocketed. Obviously, the energy in our bodies (our biological metabolism) is negligible, making the problem our social metabolism. That is, the energy flowing through our infrastructure, transport systems, industrial machinery, communications networks, electrical appliances— you get the point.

While it may seem modest to some that humanity’s total metabolism in 2010 was estimated by Yadvinder as being 17{4136d53bac2007e4117f1d8828c187063ea0a85f13bd7ca9434591c56c4e6ea2} of the terrestrial biosphere’s, I’d like to remind you that we’re only one of millions of species of organism living on land. That roughly 7 billion people i.e., nearly every single person alive, could fit shoulder-to-shoulder in the city of Los Angeles alone. I think it’s something that we need regular reminders of: The world, and hence the biosphere, is so vast it’s scarcely comprehensible…

And yet, we are becoming ‘larger’.

Yadvinder calculated that, by 2050, if we follow the mid-range UN Development Program (UNDP) scenario, that our total social metabolism will be roughly one third of that 150 TW figure for all of life on land. And worse yet, if every human being were to have the same social metabolism as the average, contemporary Chinese citizen, that number would rise to 40{4136d53bac2007e4117f1d8828c187063ea0a85f13bd7ca9434591c56c4e6ea2}. I won’t even tell you what a ‘Global US’ scenario entails.

Our Embeddedness: A National Perspective 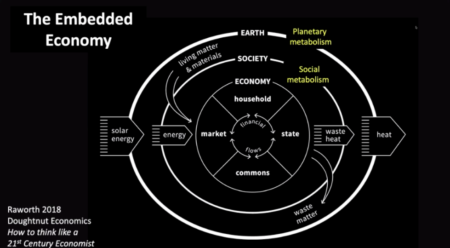 There are two ways to approach the issue: quality and quantity. By decreasing the quantity of our metabolism through more efficient energy use, saving of food, water, and electricity, and consuming less, we do the planet and ourselves a vital service. In parallel though, we also need to improve the quality of our metabolism by making it more circular and “decoupling” it from the planetary metabolism. For instance through renewables and recycling. While we can never fully decouple our metabolism from the planet’s, there is much room for improvement.

And this improvement is necessary exactly because we are embedded in the wider biosphere. Here Yadvinder cites his colleague Kate Raworth, invoking her notion of doughnut economics which rightly flips traditional economics on its head. Society and the environment are not mere externalities to an economic model that determines how we should relate to the world. Rather, the economy is embedded within society which is embedded within the environment.

Local actions have national consequences which have global side-effects. As such, Yadvinder took some time to reflect on some national figures and trends. Here we learned that the UK’s social metabolism is roughly equal (91{4136d53bac2007e4117f1d8828c187063ea0a85f13bd7ca9434591c56c4e6ea2}) of its biosphere’s metabolism. The explanation for this lies largely in the fact that the UK ‘imports’ over half its metabolism from the rest of the world. It’s a potent reminder of the interconnectedness of our world today and the impact of ‘minor’ everyday decisions. An avocado eaten here contributes to the destruction of a forest over there—a problem festering terribly in Mexico. 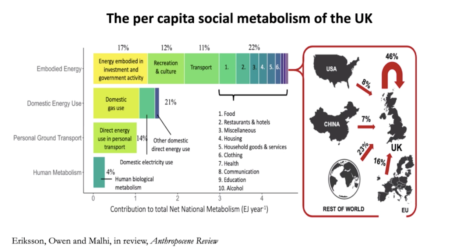 We also learned that for all their problems, cities are the settlements with the lowest per-capita metabolism. That is, each city-dweller contributes less to humanity’s social metabolism than their counterpart in the countryside.

Perhaps the most significant consequence of our embeddedness is that we cannot focus only on achieving net zero emissions. Though this is one of the two vital pillars to the sustainable revolution, we also need to address our impact on the biosphere and on biodiversity. In Yadvinder’s words: “Addressing climate change must not involve increasing pressure on the biosphere (e.g. BECCS, biofuels) or hinder restoration of the depleted biosphere.” Cleaner energy and nature-based solutions must be negotiated on equal footing.

Appropriately, he then also shared exciting news of the launch of the Oxford Martin School’s Programme in Biodiversity and Society.

To kick off the final section we learned a bit about HERO: Healthy Ecosystem Restoration in Oxfordshire. In this local project, which is a part of the new Martin School programme mentioned above, Yadvinder and his colleagues are “trying to develop this local county and environment as a case study where we can look at a number of these challenges around biosphere, sustainability, nature recovery, and see how we can deliver on the ground, and also provide lessons that can be applied nationally or internationally.”

In doing so they are bridging that ghastly chasm between theory and practice, applying academic insights to practical issues around agriculture, land restoration, and ecosystems conservation to facilitate climate resilience and adaptation. Put simply, they are developing a community of practice that aims to be part of the local foundation to a global matrix of sustainable solutions.

Yadvinder then reflected on the numerous key international meetings being held that are focusing both on climate change and biodiversity. He hopes that they will help set a suitable agenda for the next decade and relayed his optimism by stating: “I think previously, until the last few years, biodiversity has often been seen as ‘nice to have’ when we think about global sustainability, and I think now we realise that it’s both fundamental and critical to the challenge of a sustainable future.”

He closed off by giving us an earnest reminder that Oxford University is particularly well-placed to be at the forefront of events and thinking on how to achieve local, national, and global sustainability goals. That the field can take inspiration from Oxford’s medical contributions both historically and currently in our fight against the current pandemic.