Rainforests are not the lungs of our planet

The statement that Amazon is the lungs of our planet is a misconception. Our tropical forests are undoubtedly one of the most precious resources of our planet, for a multitude of reasons including being a hotspot for biodiversity and life on earth, storing carbon, climate regulation, water regulation, social and economic resilience, and much more. But not for producing Oxygen.

The Oxygen we breathe comes from our Oceans

Your science teacher was right. Plants absorb CO2 and produce Oxygen through photosynthesis. About one-third of land photosynthesis occurs in tropical forests, and the Amazon rainforest is the largest tropical forest on Earth. But the cycle doesn’t stop there: almost all of the oxygen produced by plants is consumed by the plant itself (about half), or microbial organisms and insects as they decompose plant material (the other half). Forest fires also consume oxygen. As a result, the net production of oxygen by land ecosystems is close to zero (Malhi, 2019).

Here is the catch: some of the organic matter that plants produce is removed from this cycle. This mainly happens with algae blooms: dead algae and other detritus sink into dark waters, where microbes feed on it, consuming oxygen and depleting the deep sea waters around them from oxygen. The organic matter that has not been consumed falls even deeper, until it reaches the floor of the ocean and is buried in the deep sea mud. Here we go: the Oxygen that the algae produced at the surface as it grew remains in the air, because it is not consumed by decomposers.

The same happens to the small amounts of plant matter that is buried in oxygen-free conditions on land, mostly in peat bogs, where the water table prevents microbial decomposition.

Only a tiny fraction – perhaps 0.0001% – of global photosynthesis is removed from the cycle by burial, and thus only a tiny fraction of global photosynthesis adds to atmospheric oxygen concentrations. But over millions of years, the residual oxygen left by this tiny imbalance between growth and decomposition has accumulated to form the reservoir of breathable oxygen on which all animal life depends. It has hovered around 21% of the volume of the atmosphere for millions of years.

There’s enough oxygen in the air to last for millions of years, and the amount is set by geology rather than land use (Denning, 2019).

Read all about it on Prof. Yadvinder Malhi’s blog and in an article by Prof. Scott Denning in The Conversation. 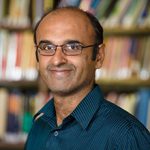